As I sit down to write this article, the wind chill outside is a frigid -20F. It’s predicted to be nearly that cold tonight without the wind and the winter storm watch posted for tomorrow night has just been upgraded to a warning, with the potential for up to a foot of new snow, and maybe more.

I don’t know about you, but this winter has already kicked my behind.

We’ve seen record snowfall, bone-chilling temperatures, relentless wind, blizzard conditions on a number of occasions (the most recent being two nights ago), very little sunshine, and plenty of ice, sleet and freezing rain. Oh, and did I mention the power outages, lingering cold and flu symptoms, and seasonal affective disorder?

The harsh winter weather has been hard on wildlife, too, and even though it probably hasn’t been as difficult as some people believe, if unforgiving conditions prevail into March, some animals won’t survive. Late winter snowstorms, especially when coupled with extreme cold, can be especially hard on deer, particularly does that have burned off most of their fat reserves and are carrying fawns.

That is creating considerable concern. Several individuals that I’ve spoken with recently desperately want to do something to help the deer survive the winter. They feel that feeding them is one way to help. Unfortunately, that is not always the case. Besides, feeding deer is prohibited in New York. It has been illegal to do so since 2003.

That doesn’t discourage some people. They speak as if the deer are their own or feel that they are protecting them. A small number seem at times to have lost sight of the fact that deer are wild animals.

These are the types of arguments I have heard.

The fact is, the feeding ban is in place as a precautionary action; one of several proactive measures taken to help curtail the spread of and, hopefully, eradicate Chronic Wasting Disease (CWD) in the state’s deer herd. CWD is caused by infectious protein particles called prions and spread from animal to animal through saliva. The potential for the spread of the disease is markedly increased when deer continuously feed from the same trough or feeding station, where grain with saliva on it can easily fall from the mouth of one animal only to be eaten by another. The disease is progressive, degenerative and always fatal.

Even if that weren’t the case, there are several other considerations that need to be taken into account. In the wild, deer will select the most nutritious foods in their environment, and their diet varies with the seasons. They are ruminants, or cud chewers. Like cows, deer swallow food without chewing and store it in the rumen, the first and largest chamber of their four-chamber stomachs. Essentially, they eat until the rumen is full. Then, the partially digested food, or cud, is regurgitated, chewed and swallowed.

They are dependant upon a variety of bacteria and microorganisms in the rumen, not digestive juices, to break food down. The types and concentrations of these microorganisms are food specific. If deer have been feeding on native browse, they have built up the micro-organisms that digest only that type [of] vegetation. If a deer suddenly fills its stomach with corn or hay, it may not have enough of the proper micro-organisms in its stomach to digest the food.

Suddenly introducing grain to their diet may also cause deer to suffer scours (diarrhea) and acidosis, a condition where excess acid builds up in the rumen killing natural, digestive-tract bacteria.

Symptoms of acidosis include indigestion, dehydration, staggering and apparent blindness, and death.

Even when deer are able to consume supplemented foods without becoming sick, they receive very little nutrition until their systems adjust to the change of diet. As a result, they can actually starve to death with full bellies.

Keep in mind, too, that many of the deer visiting feed stations are carrying fawns. If they become sick or undernourished, their fawns are put at risk, as well.

There are several other very good reasons not to feed deer. Those that visit feeding stations often become abnormally aggressive. They may injure one another fighting for food. The younger and less assertive deer are often kept away by larger and stronger ones.

Deer that become dependent upon artificial feeding often ignore their natural instincts. They lose their fear of humans and become pests, often returning in the summer to feast on garden plants and landscape and fruit trees. And, since feeding sites encourage deer to crowd together in unnaturally high densities, the risk of death by predators, like coyotes and domestic dogs, is greatly increased.

There are ways for neighboring landowners and hunting clubs to help sustain wild deer populations during winter months without breaking the law and without creating a disease or health risk. If animals go into the winter in good condition, most are able to survive prolonged periods of cold temperatures, persistent deep snow and icy conditions.

By developing and putting into practice a management plan that provides the best possible natural feed and optimal habitat, you can help to better ensure herd survival and health. This will involve timber management practices that use habitat as a guiding objective, along with the development, improvement and fertilization of food plots in areas that already provide quality wintering habitat.

For general tips on management of native vegetation and timber, creating and improving habitat, and establishing food plots on your land, please contact your local DEC regional office or Cornell Cooperative Extension.

Source: http://www.adirondackdailyenterprise.com/Columns/articles.asp?articleID=10438
Posted by Tom Rooney at 1:04 PM No comments:

The WI Department of Natural Resources appointed 18 citizens with diverse interests in the state’s wild deer herd to offer recommendations regarding future Chronic Wasting Disease management for consideration by the Department and the Wisconsin Natural Resources Board. The group became the CWD Stakeholder Advisory Group (SAG).

The full report is at:

It is worth the read, particularly the minority reports. I hope that in the event of pandemic influenza, a different framework to combat the disease is used. 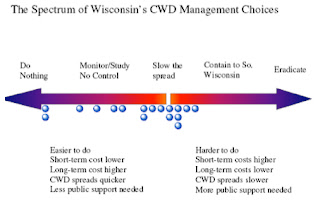 Posted by Tom Rooney at 5:24 PM No comments: