State officials said this appears to be the largest outbreak of EHD in the state.

Residents in Deerfield and Tyrone townships have found deer carcasses in rivers, lakes, ponds and marshes in the last two months. The virus causes massive internal hemorrhaging, and the animals are overcome with a fever that forces them to seek out and submerge themselves in water in an attempt to cool off. The deer die soon after coming down with fever.

The disease is spread by a tiny, biting fly, or midge.

State officials said deer develop symptoms of the illness about seven days after exposure. Signs are: Loss of appetite, loss of the fear of humans, growing progressively weaker, excessive salivation.

There is no evidence the disease can be transmitted to humans.

However, state officials recommended residents do not hunt or eat deer they believe are sick.

Russ Mason, chief of the natural resources wildlife division, said more frequent outbreaks of EHD in the state could be a result of climate changes that favor the northward spread of biting flies that spread the disease.

Source: Livingston Daily
Posted by Tom Rooney at 9:26 AM No comments:

Bridgeport has become the fifth city in West Virginia to allow deer hunting within city limits.

City Council voted Monday to allow an urban deer hunt, with officials hoping to get it started on Oct. 7.

The possibility of an urban hunt had been in doubt earlier this year, when state Division of Natural Resources officials said Bridgeport had missed a deadline to apply for a hunt.

They ultimately ruled the deadline didn't apply to the city, and allowed the council's vote to go forward.

A consultant hired by the city estimated this spring there are 38 deer per square mile in Bridgeport.

Source: Charleston Gazette
Posted by Tom Rooney at 11:09 AM No comments:

More on the State Farm report.

One in every 228 Illinois drivers will hit a deer this year, according to a State Farm analysis.

Illinois deer-car collisions are up 3 percent from five years ago, a slight uptick compared with the 18 percent increase in collisions around the country in that same time period, State Farm is reporting.

The insurance agency's research suggests that every 26 seconds in America, someone slams a deer with a vehicle.

Illinois drivers don't need to journey far to find themselves more likely to be in the path of one of the beasts.

Neighbors Michigan and Iowa are second and fourth on the State Farm list. Rounding out the top five places drivers are most likely to hit a deer are West Virginia (1), Pennsylvania (3) and Montana (5).

Source: Chicago Sun-Times
Posted by Tom Rooney at 11:07 AM No comments:

However, it is an extremely cute creature to many. A delicacy to some. And a potential lawsuit to others.

It's the spotted axis deer. But don't ask for an accurate population estimate for Maui County; the experts' answers are mostly anecdotal. However, they agree that the introduced animal's numbers are spiraling out of control.

While hunting education classes are booked five months in advance, fewer people hunt today than a generation ago. And the animals are increasingly finding refuge in town parks and suburbia, where firearms use could land hunters behind bars.

As in other states, Hawai'i has made efforts to increase the number of hunters to deal with exploding deer populations, such as offering popular hunter education classes, no bag limits, a year-round hunting season and cheap licenses.

Jeffrey DeRego, Maui Hunters and Sportsman Club president, said one of the largest obstacles to controlling the deer population — as well as those of feral pigs and goats — is America's litigious society. Rather than allow hunters onto their land to cull the herds for free, large landowners are warned by their insurance companies against allowing individuals onto their properties, he said.

However, hunting is a visitor attraction on Maui as well. The 1,000-acre Arrow One Ranch in Kula and Maui Hunting Safari offer "exclusive" hunting grounds for "free-range prey," according to the businesses' Web sites.

State wildlife biologist Shane De Mattos said axis deer have not significantly affected native forests so far, although the potential is there. Still, deer have devoured some wild taro patches on Moloka'i, which were replaced by California scrub brush.

Source: Honolulu Advertiser
Posted by Tom Rooney at 10:42 AM No comments:

One in every 39 drivers in West Virginia is likely to hit a deer in the next 12 months, State Farm said today. The probability was 1 in 45 in last year’s study. Michigan ranked second, with odds of one in 78, according to State Farm claims data and motor vehicle registration counts from the Federal Highway Administration.

“We see thousands of dollars worth of damage,” said Spyro Nicoloudakis, co-owner of A-1 Body Shop in Charleston, West Virginia. “Everybody, one time or another, has had an experience with hitting a deer.”

Crashes reach their peak from October through December -- deer mating season -- and cause more than $1 billion in vehicle damage annually, the Insurance Institute for Highway Safety said in a separate study. Urban sprawl and limits on hunting contribute to the increase, wildlife specialists said.

“You have deer that are very actively seeking each other out and competing with each other for mates,” said John Niewoonder, big game specialist at Michigan’s Department of Natural Resources. No matter the time of year, “you have more roads and more people driving around,” he said.

Michigan is combating the problem by advising motorists not to “veer for deer.” People can put themselves at greater risk when they try to avoid hitting the animals, said Bob Felt, a spokesman for the state’s transportation department.

“They end up going off the road and hitting a fixed object like a tree or a pole,” Felt said. “They get more seriously injured than they would have. To prevent fatalities and reduce injuries, we ask people to hold on to the steering wheel and brake firmly and come to a controlled stop.”

“Deer are in those areas to start with, and they have low mortality because they are not hunted,” he said. “Adult does are having twins and occasionally triplets, so the population can increase pretty rapidly.” 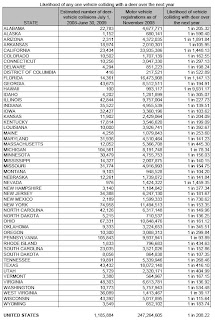 Source: Bloomberg
Posted by Tom Rooney at 9:25 AM No comments: