Officials are testing one deer for rabies after getting reports that three people were attacked by deer last week in Pulaski County.

An aggressive deer was shot and killed after it charged at an officer investigating the incidents, said Julia Dixon, a spokeswoman for the Virginia Department of Game and Inland Fisheries.

The rabies test results are expected to come back today, she said.

DGIF is asking anyone else who may have seen aggressive deer to contact its office.

"While some does with fawns may be protective of their offspring," Dixon said in a news release, "this type of extremely aggressive behavior is unusual."

The DGIF was notified Saturday by the Pulaski County Sheriff's Office that a deer had attacked a man and his son in the Delton area of the county.

The man and his 7-year-old were attacked in their front yard after they pulled up into the driveway and got out of a car, Dixon said.

The man suffered a broken arm and bruises. The child had an abrasion on his face.

A conservation officer immediately responded to the home but was unable to find the deer, Dixon said.

Another man, after hearing about that attack, reported Tuesday that he also had been attacked by a deer, Dixon said. That incident happened Monday morning.

The man told a conservation officer that he was bitten and kicked by a deer while clearing brush off his property -- about half a mile from the other attack.

While an officer interviewed that victim Wednesday, he saw three deer. Two of them fled, but a third circled and exhibited aggressive behavior, Dixon said.

"When the deer approached the officer in an aggressive manner," Dixon said in the release, "he shot and killed the animal."

Conservation police officers from DGIF asked people in that area of Pulaski County whether they had seen deer exhibiting unusual behavior or whether anyone was feeding deer or holding them in captivity, Dixon said.

"Wildlife biologists in other states have observed aggressive behavior by deer in captive situations," Dixon said. "When deer lose their natural fear of humans, they can become extremely aggressive.

Source: roanoke.com
Posted by Tom Rooney at 11:46 AM No comments: 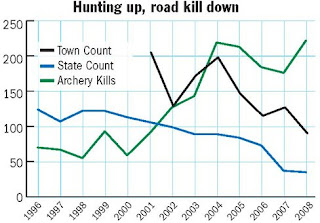 Road kills of deer in town have declined dramatically over the last decade, as the number of deer taken by hunters has risen.

“If you kill deer by hunting them, you get fewer car accidents,” Conservation Commission Chairman Ben Oko said. “That seems very clear.”

But a vast lowering of deer numbers — the culling of five out of every six deer now roaming Ridgefield’s forests — would be needed to bring the population down to levels that research has found can make a difference in keeping down ticks and Lyme disease.

The pattern holds — with some ups and downs — across the 12 years from 1996 to 2008, according to statistics assembled by Howard Kilpatrick, a wildlife biologist with the state environmental department.

And Ridgefield no longer leads the state in the number of deer killed on its roads.

“Ridgefield was consistently ranked number one for many years — it was for three, four, five years anyway,” Mr. Kilpatrick said. “In 2007, they were ranked number seven.”

Ridgefield Police count more road deaths of deer than does the state, but the trend is similar. Road kills fell from 205 seven years ago to 90 last year, according to Police Chief John Roche.

No method of counting deer — hunted, killed on the roads, or running in the woods — can be taken as 100% accurate, Mr. Kilpatrick said. His numbers are based on Deer Kill Incident Report forms that police all across the state fill out when they go to the scene of an accident.

The higher numbers from the Ridgefield Police include those incidents, but also count carcasses found along roads when no accident is reported.

Mr. Kilpatrick’s numbers on deer harvested are based on tags turned in by hunters, and are likely low since not all hunters turn them in. Still, he said his numbers were meaningful because the methodology was consistent over the 12 years.

“What Howard is saying is that there is still a correlation, whether it’s reported as what he had, or what we had,” Chief Roche said. “There is still a drop in the number of deer found dead on the side of the road.”

Full story at: Acorn Online
Posted by Tom Rooney at 10:53 AM No comments: