This year's managed deer hunt around Loch Raven Reservoir, which began Sept. 15 and continues until Jan. 31, 2010, will include 800 additional acres compared to last year's hunt, and will include an area accessible to disabled hunters.

A total of 2,400 acres of the reservoir's 8,000 acres, up from last year's 1,600 acres, will be open to bow hunting, according to Kurt Kocher, spokesman for the city's Department of Public Works.

The city department owns and manages the reservoir property outside of Towson.
Bow hunting for deer at Loch Raven Reservoir is allowed from sunrise to sunset until the end of January and will continue seasonally thereafter.

There is no hunting on Sunday.

"I think we made it clear last year that we were going to try it out and, if it worked out, then we would open up the rest of the area that we could," said Kocher.

He said continued hunting in the area is required because the deer population is "still above a number that is sustainable."

Last year, city and county officials said a large deer population was responsible for destroying undergrowth of the forest.

That destruction was leading to a decline in water quality in the reservoir, and also starving deer, they said.

"This wasn't just a public safety and environmental issue," said Don Mohler, a county spokesman. "It was very inhumane for the deer who are starving."

Deer were also involved in a number of car accidents.

Most of the additional acreage is in the northern areas of the reservoir property.
The city also has opened up a portion of the property on Dulaney Valley Road near Jarrettsville Pike that will be accessible to disabled hunters, Kocher said.

"Basically, it's an area where we could make it easily accessible for people in wheelchairs to get in and get out," he said.

The city had received one request for such access from the wife of a hunter who uses a wheelchair, Kocher said.

City and county officials unveiled the planned expansion at a meeting for community association representatives in Towson last week.

Only two people attended and both were in favor of the expanded hunting areas, according to both Koch and Mohler.

Last year was the first year the city opened the reservoir to deer hunters
Areas around the Liberty and Pretty Boy reservoirs have hosted similar hunts, without incident, for nearly four decades, officials said.

The 2,400 acres open to hunting this year do not include some of the southern most areas of the reservoir, which are near the dam as well as large numbers of housing developments and public activity, according to Kocher.

Those areas were later part of a hunt by professional hunters hired by the county.
Kocher said it is unlikely that any other areas of the reservoir will be opened to non-professional deer hunters.

"You never say never, but never," he said.

In all, about 400 deer were taken from the reservoir area between the managed bow hunt and the professional deer hunting, Kocher said.

Source: Explore Baltimore County
Posted by Tom Rooney at 10:42 AM No comments:

Deer hunting season won’t kick off until October in Indiana – that is, unless you live in Warsaw. The D.N.R. declared the city an urban deer hunting zone because of so many deer there.

Deer hunting season won’t kick off until October in Indiana – that is, unless you live in Warsaw. The D.N.R. declared the city an urban deer hunting zone because of so many deer there.

So, despite a city ordinance that bans hunting within city limits, the city council has granted 62 archers permission to hunt in four zones around town.

The areas are near homes, where residents say they’re fed up with deer.

Robert Gephart puts a lot of time into making his yard look nice for the neighborhood.

"It's frustrating, particularly when you spend the time and energy to have a nice yard," said Gephart, who put up an electronic fence to keep the deer away.

Gephart uses a fence; others will be using bows and arrows.

“This is not a trophy hunt, this is a deer reduction effort,” said Perry Hunter, Warsaw’s police chief.

“I’m hoping that this year might be a banner year for us, that we can reduce the herd quite a bit,” said Hunter.

Source: wndu.com
Posted by Tom Rooney at 9:58 AM No comments:

“Just from a conservation standpoint, thinking about the deer herd out there, this is not a good thing,” said Bryan Richards, CWD project leader for the U.S Geological Survey’s National Wildlife Health Center in Madison.

The rate of the disease in bucks 2½ years old in western Dane County and eastern Iowa County, for example, was 15.5 percent in 2008, up from 10 percent in 2007, according to the Wisconsin Department of Natural Resources.

The prevalence in yearling bucks was 6 percent in 2008, double the previous year.

“I think that outcome was anticipated at least by those of us that have spent time looking at disease trends in other areas,” Richards said.

A gradual increase in the rate of the disease is expected to continue in the future, he said.

In Colorado and Wyoming, CWD slowly increased in deer over time, eventually infecting about 30 percent of deer in some herds, said Dennis Heisey, CWD research biologist for the National Wildlife Health Center.

“In Wisconsin, our state numbers are much lower than that,” he said. “But over time, there is no reason to think we won’t get there.”

If that happens, evidence suggests hunters will go elsewhere, threatening the state’s hunting culture as a recreation and boon to the economy, Richards said.

Although research shows the disease is not threatening to humans or livestock, hunters likely would not want to hunt in areas where so many deer have CWD, he said.

And, if hunters leave, the deer herd would explode, Richards said.

“Lots of things go wrong when you have too many deer,” Richards said.

CWD was discovered in southern Wisconsin in February 2002. Nearly 152,000 deer have been tested for the disease, with 1,172 testing positive.

The DNR created a CWD management zone to minimize the spread of the disease. The zone includes all or parts of 16 counties in south-central Wisconsin, including Rock, Walworth, Jefferson and Green counties.

The DNR wants to manage the disease through continued population reduction. The deer population in the CWD management zone is lower than in recent years, but remains higher than population goals, according to the DNR.

Hunters in the zone can use rifles instead of shotguns, enjoy a holiday gun season and kill an unlimited number of bucks for every antlerless deer they shoot first.

The Wisconsin Department of Natural Resources has proposed a new chronic wasting disease management plan that aims to minimize the number of infected deer and stop the spread of the fatal disease.

The DNR’s previous goal was to try and eradicate the disease, said Dan Jones, the DNR’s CWD assistant biologist.

The strategy changed after seven years of CWD management failed to prevent an increase in the infection rate and an acceptance that the disease is not going away, according to the DNR.

“It’s become increasingly obvious that this was going to be a long-term management effort,” Jones said. “It definitely won’t be something that just goes away overnight.

“Hopefully, we can reduce it.”

The Wisconsin Natural Resources Board recently tabled the revised plan and voted to appoint a special committee to review it. The committee is expected to report back to the board at its December meeting.

According to the DNR, the CWD management plan’s key strategies include:

-- Preventing new outbreaks of CWD. Stopping CWD from cropping up in new areas of the state is less expensive and less damaging than fighting the disease after it’s established.

-- Responding to new disease locations. Aggressively responding if CWD is discovered in a new area is the best option for control.

-- Controlling distribution and intensity of CWD. This includes reducing the number of deer in infected areas through hunting and other methods.

-- Increasing public recognition and understanding of CWD risks. Residents must be informed of the latest scientific knowledge and recommendations for managing the disease.

-- Enhancing the scientific information about CWD with research, funding for university research and collaborating in studies conducted nationally and internationally.

How can I get my deer tested for CWD?

Seven stations in Rock, Walworth and Green counties work with the Wisconsin Department of Natural Resources to test deer for CWD.

The World Health Organization advises people to only eat meat from animals that test negative for CWD, Foy said.

The bottom line is science is in the beginning stage of knowledge and research on CWD, Foy said.

“Why take a chance?” he said. “Let’s err on the side of caution until we know more.”

When you kill a deer, take it to one of the registration stations helping with CWD testing, said Dan Jones, CWD assistant biologist for the DNR.

The registration station will collect your deer’s head and your contact information, he said. In some cases, lymph nodes can be taken from the deer’s neck for testing.

A number is assigned to the deer, and the head goes to a DNR testing lab, Jones said.

The result of the test is mailed to you on a postcard, he said. If the test is positive, you’ll get a phone call.

Hunters can have their deer tested for free, Jones said, and results will be returned in four to six weeks.

Veterinarians will test for a fee.

Testing is voluntary except in mandatory zones, including the eastern half of Rock County and the western half of Walworth County, he said.

In Rock County, 5,917 deer have been analyzed for CWD, with 70 testing positive.

In Walworth County, 5,428 deer have been tested for CWD, with 54 testing positive. 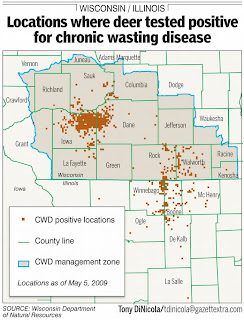 Source: Janesville Gazette
Posted by Tom Rooney at 9:28 AM 1 comment: