A judge Thursday let stand a ban on feeding and baiting deer in Michigan's Lower Peninsula, ruling the state had authority to issue the emergency rule after its first case of chronic wasting disease was detected.

The decision was a blow for farmers and store owners who sued because they're being hurt financially by the ban. Hunters place piles of bait -- beets, carrots, corn, apples and other produce -- in areas to attract deer.

After hearing arguments, Ingham County Circuit Judge Joyce Draganchuk acknowledged that a number of people earn a living by growing and selling the bait. But she said the Michigan Department of Natural Resources based its decision on "sound scientific management principles."

"It did it for the purpose of preserving deer and elk herd so that those who make their living from it may continue to do so in the future," Draganchuk said of the ban imposed Aug. 26. It's effective for six months and could be extended.

State attorneys defended the policy as a necessary precaution to prevent the spread of the disease.

It wasn't immediately known if the plaintiffs would file an appeal. Their attorney, Ed McNeely argued the ban was arbitrary and said arguments that it would stop the disease from spreading were "vastly overblown." A number of farmers and store owners watched the arguments in a Lansing courtroom.

Mike Kinzel, part owner of Highland Fuel in Hartland, which sells $40,000 to $50,000 worth of deer feed, said afterward that he's concerned the ban could be in effect "forever" if the state doesn't start taking into consideration the overall financial hit to the hunting industry.

The infected deer was discovered at a captive deer operation near Grand Rapids. It's unknown if the disease exists in the wild deer population. Chronic wasting disease attacks the brains of infected deer and elk and produces small lesions that result in death.

It has never been shown to cause illness in humans.

"We are very pleased and felt all along we were doing the necessary and right thing," DNR spokeswoman Mary Dettloff said.

The state adopted a policy in 2002 that called for an immediate prohibition on feeding if chronic wasting disease were detected in either peninsula or within 50 miles of the state line.

Another part of the lawsuit pertaining to whether wildlife rehabilitation facilities can have fawns or not wasn't addressed Thursday.

Source: MLive
Posted by Tom Rooney at 7:46 PM No comments: 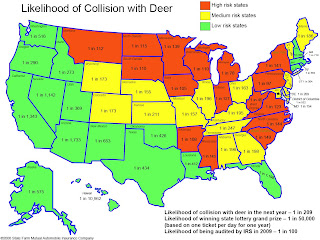 For the second year in a row the vehicles most likely to collide with a deer are in West Virginia. Using its deer claims data from the last half of 2007 and the first half of 2008 and motor vehicle registration counts by state from the Federal Highway Administration, State Farm estimates the chances of a West Virginia vehicle colliding with a deer over the next 12 months at 1 in 45. Such a collision is even more likely in West Virginia than it was a year ago when the odds were 1 in 57.

The probability of a vehicle hitting a deer in West Virginia sometime in the next year is roughly two times greater than the possibility that you will be audited by the Internal Revenue Service in 2009 and 1,100 times greater than your chance of winning a state lottery grand prize if you buy one ticket per day for the next year.

Michigan remains second on the list. The likelihood of a specific vehicle striking a deer there next year is 1 in 78. Pennsylvania (1 in 97), Iowa (1 in 105) and Arkansas (1 in 108) each moved up one spot on the list to third, fourth and fifth respectively.

South Dakota is sixth. Wisconsin dropped from third to seventh. Montana, North Dakota and Virginia round out the top 10.

The state in which deer-vehicle collisions are least likely is still Hawaii (1 in 10,962).

The average property damage cost of these incidents was just over $2,950, up 2.5 percent from a year ago.

According to the Insurance Institute for Highway Safety®, there are approximately 1.5 million deer-vehicle collisions annually in the United States, causing more than 150 fatalities and $1.1 billion in property damage. Rooney notes: In any given year, you are over four times more likely to get get killed by a deer than by a shark. State Farm’s data shows the total number of deer-vehicle collisions in the United States has increased 14.9 percent from five years ago.

These collisions are more frequent during the deer migration and mating season in October, November and December. The combination of growing deer populations and the displacement of deer habitat caused by urban sprawl are producing increasingly hazardous conditions for motorists and deer.

“State Farm has been committed to auto safety for several decades and that’s why we want to call attention to potential hazards like this one,” said Vice President-Strategic Resources Laurette Stiles. “We believe providing our customers with updated safety information helps prevent adversity.”

Here are tips on how to reduce the chances that a deer-vehicle collision involving your vehicle will be part of the story we tell in next year’s version of this news release:

Remember that deer are most active between 6 and 9 p.m.

Use high beam headlamps as much as possible at night to illuminate the areas from which deer will enter roadways.

Keep in mind that deer generally travel in herds – if you see one, there is a strong possibility others are nearby.

Do not rely on car-mounted deer whistles. They don’t work.

If a deer collision seems inevitable, attempting to swerve out of the way could cause you to lose control of your vehicle or place you in the path of an oncoming vehicle.

More than 300 wild Kent County deer have been tested and found to be clear of chronic wasting disease after the highly contagious disorder was found in one northern Kent County farm-raised deer in August.

As of Tuesday, state Department of Natural Resources spokeswoman Mary Detloff said, no new cases of the disease had been discovered in Michigan.

Testing of deer continues as the state hopes to ensure the disease is not spreading in the wild population. It aims to test 8,000 deer this year. Deer being tested are brought in by hunters as well as harvested with special permits in the hot zone area.

To prevent large numbers of deer from visiting single locations where the disease might spread, the DNR in September instituted a complete ban in the Lower Peninsula on feeding deer, whether as bait for hunting or for recreational viewing. The illness spreads through an abnormal protein carried in deer feces, urine and saliva that can survive for years in the ground.

Source: MLive
Posted by Tom Rooney at 4:37 PM No comments: