Cayuga Heights village residents spoke overwhelmingly Wednesday evening in favor of a plan to either sterilize or cull all the deer in the village.

The village trustees held a special public hearing at Cayuga Heights Elementary School as part of their environmental review process on a deer remediation plan that calls for sterilizing 20-60 does, then culling or killing the remainder of the deer. The meeting drew more than 100 people.

Among villagers who spoke, supporters of the plan outnumbered detractors 4 to 1. Supporters recounted stories of car-deer accidents and near-misses, neighbors and friends with Lyme disease, and deer unafraid of dogs or people.

Forty-year village resident Barbara Collier said she was annoyed by people telling her to plant a garden the deer won't like, because she doesn't like it either.

"I'm an animal lover, but I don't need my herd of 11 deer coming through my yard," she said.

Robert Harris, a 35-year resident, said he was jogging early in the morning and saw a small herd of deer. He continued on his path, assuming the deer would move but instead, "the deer hissed at me," he said, to appreciative laughter from some of the audience.

Villager Corinne Frantz said she spoke with her children around the dinner table about the deer problem and told them that it's possible to have strong, conflicting emotions about killing the deer, but that with no natural predators, humans have a responsibility to reduce the deer herd.

In two hours of comment from villagers, with each speaker limited to two minutes, roughly half a dozen villagers spoke against the plan to kill the deer.

Full story is available at: Ithaca Journal
Posted by Tom Rooney at 11:02 AM No comments:

WISCONSIN NEWS: Where the Deer Are

The Wisconsin DNR just published this map, showing where deer exceed population goals and where deer are relatively scarce. 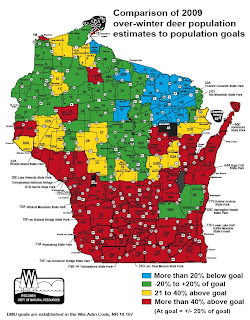 Posted by Tom Rooney at 9:29 AM No comments:

From the low three figures to a steady six figures — that's the story of Arkansas' deer harvest records.

Numerous hunters in the state, sometimes after an unproductive session in the woods, many grumble that "deer hunting just isn't what it was in the old days."

The statistics are not on their side, however.

Many other hunters realistically realize that the state has many, many more deer here in 2009 than it did a couple of generations back. They may also have gripes about not enough deer in this area, few bucks in that county, too small racks on the bucks somewhere else. But the numbers are indisputable — Arkansas deer are plentiful, although not to everyone's satisfaction.

The first year of official checking of deer taken by hunters by the Arkansas Game and Fish Commission was 1938.

Picture that autumn. The state and the nation were still in the grips of the Great Depression. Many Arkansans sought deer for the most basic of objectives. They needed food on the table. That hunting season, 203 were checked by hunters with AGFC's representatives.

The economy was bleak, but restoration of Arkansas's deer had been under way for more than a decade, most as the efforts may seem today. Deer "farms" were in operation in several locations. Deer were being relocated to places where they were absent and had been scarce for years since the late 19th century and early 20th century.

It is a reasonable assumption that some deer were taken by hunters in the fall of 1938 and were not checked, but were taken straight to kitchen use.

Last season, the 2008 hunt that stretched into early 2009, 184,991 deer were tallied by Arkansas hunters, a total second only to the peak season of 1999 when 194,687 deer were logged across the state in records of all three hunting methods archery, muzzle-loader and modern gun.

long with the outright poaching and night-hunting, is present today as it was in 1938. Unknown, of course, is the extent of these illegal takings of deer. Does poaching account for a small percentage of the deer taken each year or a large amount?

Deer hunting numbers rose steadily from the early years, especially after the AGFC was reorganized into its present form by Amendment 35 of the Arkansas Constitution which went into effect in 1945. From the 1,687 deer checked that year, the state total was 5,122 just five years later. Fifteen years later, in 1960, the deer harvest total was 15,000.

Deer harvest growth continued through the 1960s and see-sawed a bit in the 1970s as the first steps toward hunting of female deer, does, in some areas began. Some protests came forth after the 1978 season when 43,452 deer were checked. Doe hunting was reduced, and in 1979 the total for the state was 36,074.

About this time, more tailored deer hunting regulations were crafted by the AGFC, allowing for more hunting days and more taking of does in areas where deer had become plentiful. Restricted rules were in effect for areas of lesser deer numbers.

It was 1987 when Arkansas's deer take reached six figures, with 106,392 checked that year by hunters. The total dipped in 1990, again with tightened hunting rules. Then it returned to six figures in 1991. The peak of 1999 climaxed five years of impressive numbers on the deer hunting scene.

Some hunters protested that too many deer were falling to hunters. New strategies in deer management came forth, including quality deer objectives on both private land and some public land.

After a dip in 2003, when tighter deer hunting rules were coupled with unfavorable weather, the statewide deer totals have climbed again to approach the peak of a decade ago.

Source: Baxter Bulletin
Posted by Tom Rooney at 9:27 AM No comments:

How many deer are in Wisconsin? It depends on who you ask. From a recent story:

A debate continues to rage between Wisconsin hunters and the Department of Natural Resources over the true number of deer in the state. Hunters have repeatedly argued the deer population is dropping. The DNR counters saying there are too many deer in Wisconsin and the agency is studying a plan to extend the deer hunting season.

The debate is not new. What is new is some vehicle collision data that can be brought to bear on the question.

Now, hunters say they have the proof they need, a study that reportedly shows car-deer crashes in Wisconsin has dropped and has been dropping for years. Joe Terrien of MJ Collision Center in Bellevue has seen the numbers drop first hand. "Six years ago, we saw at least on deer hit a day. Now we're seeing two a week."

A collision data seems like a good source of data, at least at the level of a township. But does this hold up statewide?

Data from the Department of Transportation seem to confirm the drop. In 2003, a peak year according to the DOT there were more than 20 thousand car deer crashes reported by the State Patrol. Since then, the numbers are trending lower.

You can look at the 2008 DoT Report here. I do not think there is much ammunition to give credence to the hunters saying deer populations are down. Here is data showing the relationship between deer-vehicle collisions in Wisconsin from 1993 to 2008. Do you see a trend? Because there isn't one. 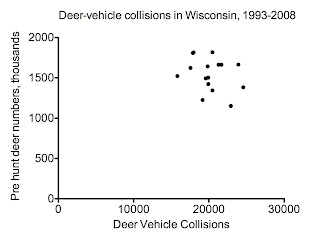 What does this mean? The interpretation is ambiguous. If you think deer densities should correlate with deer crashes, you would probably be suspect of the crash estimates, the deer population estimates, or both.

But DNR Spokesperson Kieth Warnke denied the connection between less deer and less car deer crashes."I don't think they reflect a magnitude of change in deer population state wide." Warnke does not deny the numbers in the study. But The DNR and DOT say there could be other factors involved. They give examples such as the bad economy is keeping many drivers off the roads and that may be responsible for the lower numbers.

I don't think Keith is correct here, either. His reasoning is correct, but he seems to exclude fewer deer as an explanation. The ideal approach to estimating population trends should incorporate all sources of data, but of course that is easier said than done.

In the final analysis, the exact number of deer does not really matter. If you are a hunter, what matters is seeing a deer during deer season. If you are a driver, what matters is not colliding with deer. Actual population estimates are nothing more than a tool to help population managers do their job. By this measure, the current SAK model, with all its flaws, does a reasonable job. That is not to say the DNR cannot do better. However, I think this latest salvo from the disgruntled deer hunters association has missed its target.